In the Church News for 25 January, 1992, there was a story about a wonderful sister and brother in Cebu in the Philippines. The title of the article: “He’s not heavy, he’s my brother.” I wish I could show you the pictures I have, but they’re not “digital.” (You have to remember that I’m a digital immigrant, NOT a digital native….)

When people see Anastacio and Virginia Huguete, the words from a well-known story and song, “He Ain’t Heavy, He’s My Brother,” often come to mind. The brother and his sister, members of the Talisay 1st Ward, Talisay Philippines Stake, could be a contemporary version of the slogan made famous by Boys Town founder Father Edward J. Flanagan in the 1920s.Father Flanagan penned the phrase after watching the young men living in his boys home carry Howard Loomis, a disabled young boy who was unable to walk, on their backs. That same devotion that existed among those young boys can be found between the Huguetes as Sister Huguete carries her brother, 64, who has suffered two severe strokes, to and from Church meetings. In a recent visit to the area to attend a stake conference, Elder Vaughn J. Featherstone of the Seventy, first counselor in the Philippines/Micronesia Area, wrote: “I was startled to see a woman carrying a man on her back. She brought him into the priesthood session, helped him sit on the bench and then left. When the priesthood session was over, she came back in, had him climb on her back and she carried him outside of the chapel. . . . The following day they were in all of the sessions.” Elder Featherstone soon found out that the man and woman were brother and sister. Brother Huguete, a well-known singer and entertainer in his native land, was left almost-totally paralyzed after suffering the two strokes in 1976. The strokes affected his speech and voice, but he was still able to think clearly. Sister Huguete, a single sister, began to take constant care of her brother, helping him with therapy and with any other need he had. Through her efforts, he gained limited use of his legs. He is able to stand, but cannot walk. He is also able to write. In 1979, the two were baptized along with two of Brother Huguete’s children. On the day of the baptism, Brother Huguete asked the elders to heat the water because he was afraid of what the cold water would do to him. The heater was broken, he was baptized anyway and witnessed his own miracle when he was immersed into warm water. When Virginia dressed him after the baptism, she was amazed to find that his body was warm. At the time of their baptism, they covenanted with the Lord to keep His commandments, which meant attending their Sunday meetings and partaking of the sacrament. They have done this faithfully for 12 years, according to Elder Joseph and Sister Alene E. Felix, missionaries in the Cebu Philippines Mission. “Virginia carries her brother on her back to and from their Church meetings, many times unable to ride a jeepney or pedicab so she carries him all the way.” Sister Huguete manages to carry her brother, who weighs about 130 pounds, more than two kilometers to their Church meetings. The Sunday following a typhoon, meetings were held Sunday morning instead of the usual afternoon time so members could help the typhoon victims. The Huguetes did not hear of the change and missed the meeting. “They both sat down and wept, for this was the only time Virginia had missed since her baptism,” Brother and Sister Felix explained. Brother Huguete serves as Sunday School president in his ward and Sister Huguete serves as ward Primary president. “To be a member of the Church is a pearl of great price,” Brother Huguete remarked. “I believe the greatest attainment a man or a woman could ever have is to be baptized in the Church as I am, to hold the priesthood as I do, to know that Christ is our Savior, which I testify is true, and to enter the temple for their own endowments as I have, and to be a part of an eternal family unit. Because of these great blessings, I am blessed above all men.” (Sheridan R. Sheffield)

There was a follow-up story in the Church News for 13 June, 1992. It made me feel so happy! SISTER’S DEDICATION PROMPTS READERS TO DONATE FOR CYCLE

Thanks to the giving hearts of Church members, Virginia Huguete and her brother, Anastacio, are finding it easier to get to Church meetings and other activities. Funds were contributed to the Huguetes – members of the Talisay 1st Ward, Talisay Philippines Stake – to help them find a mode of transportation after a Jan. 25, 1992, Church News article featured the Huguetes and their struggles of getting around. When they were baptized in 1979, Sister Huguete and her brother – who is partially paralyzed – vowed to never miss a meeting. Because transportation was often unavailable or unaffordable, Sister Huguete would carry her 130-pound brother on her back more than two kilometers to Church meetings. Brother Huguete, a well-known singer and entertainer in the Philippines, was left almost totally paralyzed after suffering two strokes in 1976. The strokes affected his speech and voice, and he has limited use of his legs as he is able to stand, but not walk. The recent contributions have assisted the Huguetes in getting a tricycad, a bicycle with a side car attached, so Sister Huguete can get her brother back and forth to Church. Elder Joseph and Sister Alene Felix, missionaries in the Philippines Cebu Mission, said the Huguetes are enjoying their tricycad “very much as it provides them with transportation to Church meetings and a feeling of independence.” The tricycad also has the potential of providing them with a little income for the future if they choose to rent it to tricycad operators, the Felixes explained. (This is not their Tricycad, but it will give you an idea of what they’re like).

Members have also helped the Huguetes in other ways, they added. Brother and Sister Huguete recently returned from a week at the Manila Philippines Temple where they were sealed to their aged mother. They traveled by boat from Cebu Island to and from Luzon Island, where the temple is located. While they were in Manila, full-time missionaries and stake missionaries upgraded the Huguetes’ nipa hut (palm-thatched home) by pouring a cement floor, patio and walkway. “Needless to say, they were completely surprised and flabbergasted upon returning home following their long boat trip,” Brother and Sister Felix said. (This is a picture of a Nipa Hut – Bahay Kubo – but it’s not their home – it just gives you an idea) 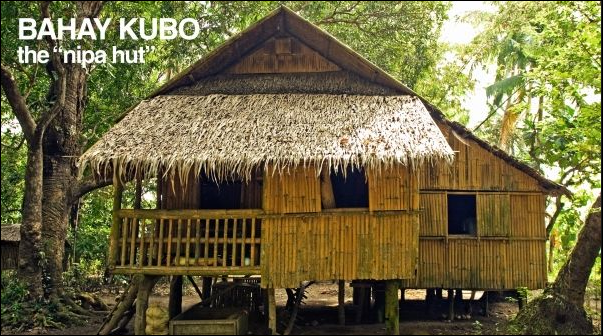